Opens in a new window
Home / Sleep News / We Are Losing 134.9 Hours of Sleep to Wildfires Every Year

We Are Losing 134.9 Hours of Sleep to Wildfires Every Year

In recent years, wildfire smoke has stretched from Southern California to New York City and nearly all points in between. No longer are wildfires just a forest thing.

That adds up, and it has an effect on our sleep. According to a SleepFoundation.org survey of 1,250 adults across the United States, we lose as much as 1 hour and 28 minutes of sleep a night when wildfires are raging, on average. Stretch that out to a three-month wildfire season, and we lose 134.9 hours of sleep a year.

It’s not getting much better. From January to July 2022, 5.7 million acres of U.S. land burned because of wildfires. That’s the third-largest total ever in that timeframe. Here are the wildfires burning in the country right now:

In 2020, which saw a record 10.2 million acres burned for the year, one in seven people in the U.S. experienced at least one “unhealthy” air day, according to the Environmental Protection Agency’s (EPA) air-quality data.

Wildfire smoke in the air can make it hard to breathe, especially for people with asthma or chronic lung or heart conditions. When that smoke is at its worst, experts recommend using air filters, keeping windows shut, and avoiding the outdoors.

These wildfire health risks can stress us out, even if we’re not in the fire’s direct path. That stress shows up in our sleep, says Melissa Milanak, Ph.D., an associate professor of psychiatry and behavioral sciences at the Medical University of South Carolina in Charleston, South Carolina, and founder of MIND Impact Consulting. 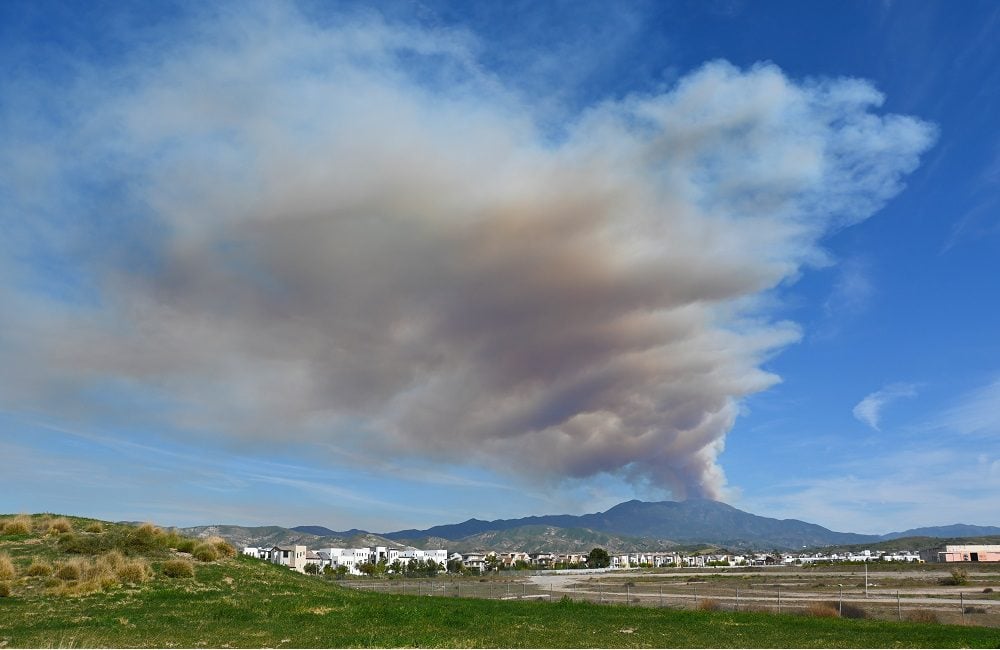 “For most people, when they’re thinking about trauma, they think of nightmares and forget that insomnia is such a huge piece [of it],” says Milanak, adding that this lack of sleep puts our minds in a state of hypervigilance. “No matter how exhausted you are, your body’s not going to let you rest because it wants to keep you on edge [and to] keep you on alert to be able to protect yourself.”

So what can we do? Let’s start by looking closer at what wildfires do to our physical and mental health and how they affect our sleep, no matter where we sleep.

Where There’s Smoke, There Are Problems

Wildfire smoke includes particles from all types of things. These particles can irritate the lungs and exacerbate asthma, chronic obstructive pulmonary disease (COPD), and a variety of heart conditions. They can also weaken immune systems, making it harder to fight viruses and bacteria.

With wildfires burning bigger and longer, which experts attribute to climate change, those particles may travel farther. There’s not much letting up, either: The U.S. Forest Service says the typical length of the wildfire season has practically doubled, forcing a shift to the concept of a “fire year.”

Hence the national impact. According to survey respondents, 60.2% say they’ve smelled wildfire smoke at their home or workplace in the past five years, and 47.8% say they’ve seen it. Some 41.8% say they’ve had to shut their windows because of fire smoke seeping in.

It’s not a case of proximity, either. Of respondents, 86.2% lived or worked at least 10 miles from the nearest wildfire, with 50.2% being at least 50 miles away. Regardless of location, 58.1% of surveyed adults say that smoke during wildfires has affected their sleep. Nearly a quarter of respondents (23.9%) say they’ve lost sleep when wildfires were at their peak, with 22.6% saying they’ve at least slept “irregularly.”

It varies across the nation, but wildfire-related insomnia is worst in the South.

SleepFoundation.org survey respondents in the Census region stretching from Oklahoma and Texas to Maryland and Florida reported losing almost two full hours of sleep per night (1 hour and 53 minutes) when wildfires were at their worst. That was cut down to about an hour and half for those in the West (1 hour, 28 minutes) and Northeast (1 hour, 26 minutes). Midwestern residents fared best, losing 1 hour and 11 minutes per night during peak wildfire times.

Regardless of location, 58.1% of surveyed adults say that smoke during wildfires has affected their sleep.

A different picture emerges when looking at states hit hard in the past year. In Colorado, which experienced its worst-ever wildfires around New Year’s Day 2022, survey respondents reported losing 1 hour and 50 minutes of sleep when fires raged. Respondents in Oregon and Washington state, which saw fires of their own plus smoke from burns in California and British Columbia, also clocked in at just under two hours of sleep lost. Some 93.3% of Oregonians reported smelling wildfire smoke at their home or business in the past five years, as well as 80.8% of Washingtonians.

California had the largest volume of wildfires in 2021, with 2.6 million acres burned — equal to 78.8% of acres burned nationwide. But surveyed adults there reported losing 1 hour and 22 minutes of sleep during peak wildfire season, below the U.S. average of 1 hour, 28 minutes.

How Do Wildfires Affect Mental Health? This was top of mind for Jyoti Mishra, Ph.D., associate professor of psychiatry and director of the NEATLabs at the University of California San Diego, after 2018’s Camp Fire became California’s deadliest and most destructive fire. She and her team led a study that found a dramatic increase of post-traumatic stress disorder (PTSD) among people who were affected or witnessed the fire versus those who just heard about it. PTSD is often linked to sleep issues.

“The changing climate is really one of the most important environmental stressors that there is, [and it will] affect lives deeply in the next decade or so and beyond,” Mishra says.

Wildfires also can change the habits that protect our well-being and sleep. For instance, 15.2% of SleepFoundation.org respondents say that wildfires prevented them from exercising — a number that grew to 46.7% among Oregonians.

“Just knowing that you’re breathing clean air, and you’ve got a plan to go to get out of there if you have to, kind of creates a safety net that may help people worry a little bit less.”
Dr. Alex Dimitriu,
Menlo Park Psychiatry & Sleep Medicine

Tips For Sleeping When You’re Anxious About Wildfires

Preparation can ease stress and anxiety when wildfires are around. The EPA has fire-season preparation recommendations, which include stocking up on medications and food, and tips for creating an exit strategy. When possible, try to stay relaxed, Milanak says. She suggests breathing exercises or progressive muscle relaxation, in addition to maintaining a consistent bedtime routine.

Dr. Alex Dimitriu, founder of Menlo Park Psychiatry & Sleep Medicine in Menlo Park, California, and a SleepFoundation.org medical-review board member, echoes the sentiment about treating wildfires as a trauma, in that they are ongoing. He also suggests setting up home air purifiers to combat wildfire smoke. According to SleepFoundation.org’s survey, 56.7% of U.S. adults already do that.

“Just knowing that you’re breathing clean air, and you’ve got a plan to go to get out of there if you have to, kind of creates a safety net that may help people worry a little bit less,” Dr. Dimitriu says.

The survey commissioned by SleepFoundation.org was conducted on the online survey platform Pollfish between Aug. 2 and 3, 2022. Results are from 1,250 survey participants who were U.S. residents ages 18 and older. All attested to answering the survey questions truthfully and accurately.

Emma Yasinski is a science and medical journalist based in Florida. Her work has appeared in MedShadow.org, National Geographic, Undark.org, and more.

Emma Yasinski is a science and medical journalist based in Florida. Her work has appeared in MedShadow.org, National Geographic, Undark.org, and more.