Opens in a new window
Home / Sleep News / Who's Napping, How Long, and What Does It Mean for Our Health?

Who’s Napping, How Long, and What Does It Mean for Our Health?

If you’re a nap fan, you’re not alone. About 4 of 5 U.S. adults (80.7%) reported taking at least one nap of 10 minutes or more in the past three months, according to a recent survey from the sleep app Sleep Cycle and SleepFoundation.org. And 30.5% of adults nap more than once a week.

Although it may not be healthy for all age groups, regular napping can be good for you because of the cognitive and physical benefits, says Michael Grandner, Ph.D., director of the Sleep and Health Research Program at the University of Arizona and a SleepFoundation.org medical-review panel member. Think of a nap like having a snack between meals, he says.

“We have meals, but sometimes it’s also good to have a snack,” Grandner says. “A light snack can give you energy to help take you through the day. A nap can do the same thing.”

So how much do we really know about how we nap and the right way to nap to reap the benefits? SleepFoundation.org and Sleep Cycle asked 1,209 of the app’s active users, in addition to experts,

What Kinds of People Are Napping … And Are They Napping at Work?

According to the survey, the age group most likely to nap is 25- to 34-year-olds, with 83.4% of those respondents saying they have napped for at least 10 minutes in the past three months.

“A light snack can give you energy to help take you through the day. A nap can do the same thing.”
Michael Grandner, Ph.D.,
Director of Sleep and Health Research, University of Arizona

Laura Rosenthal, a 29-year-old communications coordinator in San Francisco, is among this group of nappers. She sets a timer for about an hour during weekdays to nap, and she especially enjoys weekend napping.

Survey respondents who nap at least once a week average 3.3 naps each week, while 7% of us nap every day. And yes, that means some of us may be sleeping on the job. In fact, 42.7% of U.S. full-time workers say they regularly nap during a break in a typical workday, according to a separate SleepFoundation.org survey of 1,250 employed adults in September 2022.

Nap length appears to decrease when we age, according to the survey, but we might nap more often. Among survey respondents ages 25 to 34, the average nap was 1 hour and 18.3 minutes, compared to 43.4 minutes for respondents ages 55 and older. In each age group, average nap length got shorter with increased age. 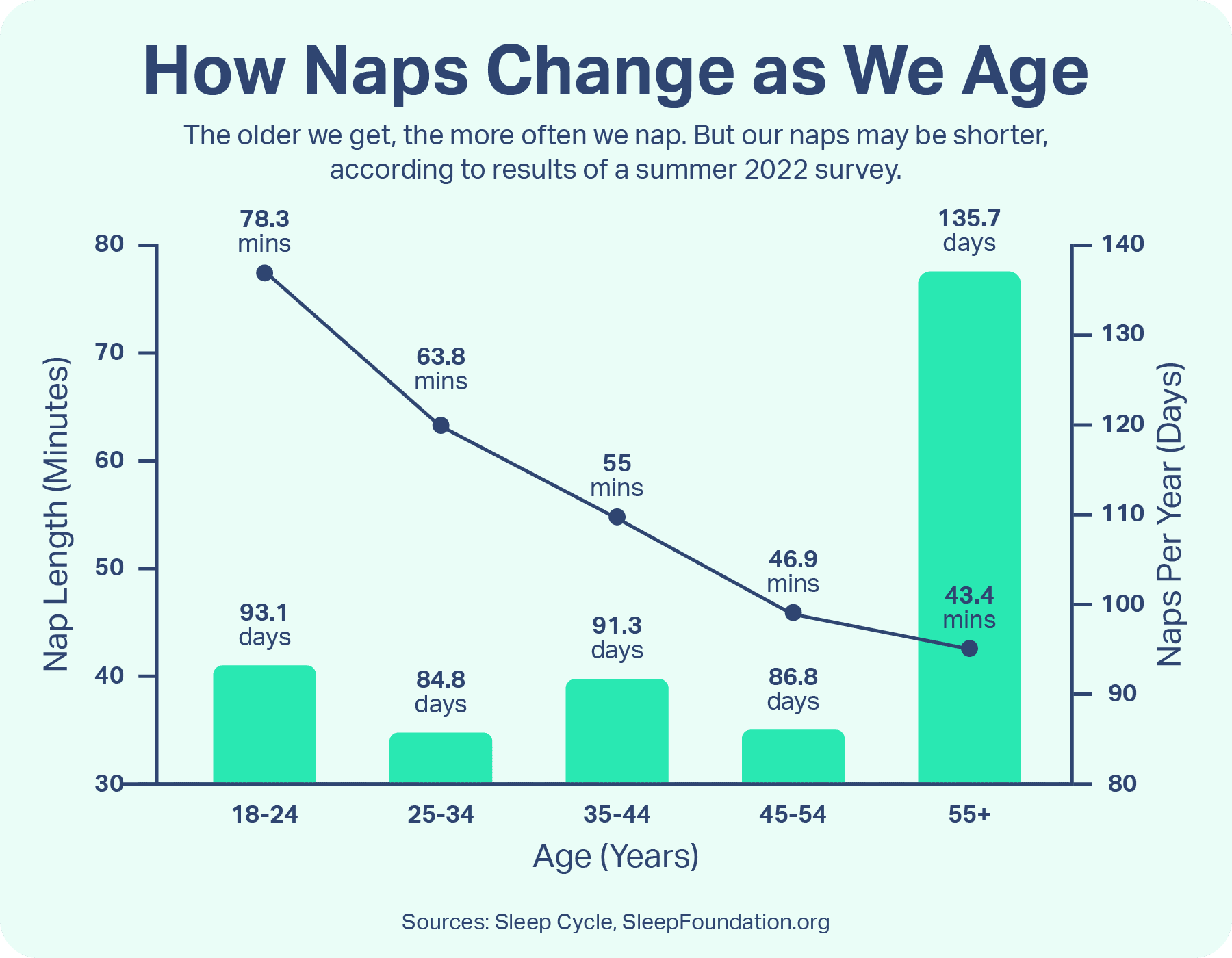 Overall, 43.6% of surveyed adults say they’d nap more often, if they could, compared to 20.8% who’d prefer napping less frequently, according to the survey. Yet, people don’t necessarily crave longer naps: Only 18.1% of nappers say they’d nap for longer.

There are several ways to nap, say experts, but the “just right” approach to a good nap is all about timing.

The ‘Sweet Spot’ for Napping

Why aren’t those numbers higher? With the average nap clocking in at 60.2 minutes, some people could be waking up during slow-wave sleep, a stage of deep sleep that occurs about an hour after falling asleep, resulting in drowsiness.

To avoid this dazed post-waking state, which is called sleep inertia, experts say either nap much shorter — or sleep longer. 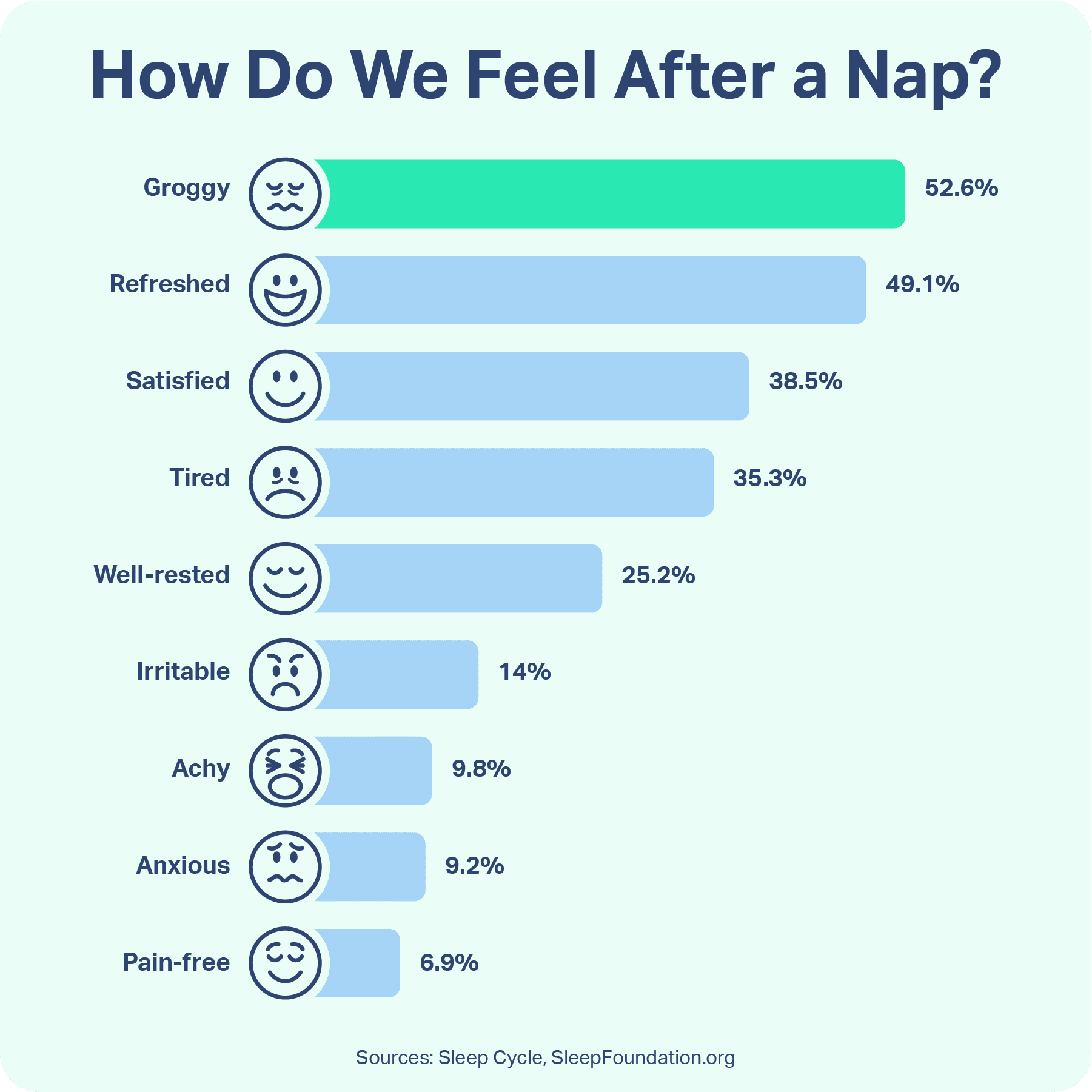 This type of brief nap, also known as a power nap, is just enough to get some light rest without dropping into the heavier, deeper sleep that is hard to wake up from, Dr. Singh says.

“It’s on purpose, under relatively well-rested conditions, and usually during the middle of the day,” Grandner says.

Even if the sleeper just barely dozes, it’s still enough time for the brain to work at improving cognitive functions such as memory, the ability to complete complex tasks, and logical reasoning, he says.

Sleeping too long or too late in the day, however, can interfere with your nighttime rest, leading to more naps. That’s when “the cycle becomes vicious,” Dr. Singh says.

What’s the optimal time for a nap? Between 1 and 3 p.m., when alertness tends to dip.

“That does coincide with a nice time for a nap,” says Natalie Dautovich, Ph.D., a psychologist and director of Chronopsychology: The Daily Research Lab at Virginia Commonwealth University.

That’s when Jennie Burke, a 50-year-old freelance writer from Baltimore, takes her daily nap. She likes to lie down after lunch as part of her sleep hygiene, even if it’s just listening to a meditation app to help clear her mind.

“After about 20 minutes or so, you get up and you just feel better,” she says.

What Does Napping Mean for Our Health?

Naps can help fight fatigue, but while a power nap can give us a nice boost of energy, longer naps may signal that we’re not resting well enough at night.

More than half of Sleep Cycle and SleepFoundation.org survey respondents (59%) say they nap because they didn’t sleep enough the night before. This could be a sleep-replacement nap, which can be as long as two to four hours, Grandner says. It’s not as efficient or deep as nighttime sleep, he says.

But Dautovich says you may still wake up refreshed.

“You will have enough time, depending on your own rhythm, to cycle through all the different stages of sleep,” she says.

Dautovich warns that moderate nap lengths ranging from 30 minutes up to 1.5 hours are problematic because the body can drop into a deep sleep but doesn’t complete a full sleep cycle. This could be why nappers feel groggy when they wake up, she says.

Napping may also lead to clues about our overall health. Studies have shown a link between regular napping and conditions ranging from high blood pressure and diabetes to Alzheimer’s disease. But Dautovich cautions this doesn’t necessarily mean that napping causes these health issues. Rather, a persistent state of exhaustion that requires daytime sleeping may be a sign of an underlying health problem, she says.

Nap length appears to decrease when we age, but we might nap more often.

Nearly three-quarters of survey respondents who nap (72.7%) say they do it because they feel tired, while 23.1% say they don’t or can’t control their napping.

Grandner says he believes that naps should be intentional and energizing. So if you’re too exhausted to stay awake, for any length of time, that could be an issue. He calls this a “nap of necessity” — “the most common nap by far.”

Other reasons for excessive napping can include medication that makes you sleepy or sleep apnea, a sleep disorder where breathing stops and starts and that often leads to a tired feeling throughout the day.

Whatever the reason, if you’re constantly so tired that you feel you have to nap, consider speaking with a physician, Dr. Singh says.

“Don’t sleep on your sleep problem,” he says.

The survey was commissioned by SleepFoundation.org and Sleep Cycle and was conducted between Aug. 29 and Sept. 12, 2022. Results are from the completed surveys of 1,209 Sleep Cycle active users who lived in the United States at the time of the survey. All attested to answering the survey questions truthfully and accurately.