Opens in a new window
Home / Sleep News / Why Are We All Still Watching TV Right Before Bed?

Why Are We All Still Watching TV Right Before Bed?

It has happened to everyone. You plan on going to bed at a reasonable hour, and then your Netflix show ends on a cliffhanger. Before you have a chance to turn off the TV, the next episode starts. You’re hooked.

According to a SleepFoundation.org poll, watching television is by far the most popular bedtime ritual for U.S. adults, cited as the go-to routine for 52.7% of sleepers. That’s well above the next two routines: showering or bathing (32%) and talking to a partner (22.9%). Watching TV before bed is not quite a ritual as old as sleep itself. But it’s ingrained for many of us, as 73.1% of respondents say they watch television before sleeping simply out of habit. Sometimes we watch TV before bed to forget about our problems, as 68% or respondents say. Or it’s the best time to keep up with our favorite shows (66.9%).

Here’s the thing, though: That TV before bed might not be good for us.

“It’s artificial light exposure at the wrong times — at night when the body needs darkness to facilitate sleep — that poses a threat to nightly rest and to your body’s bio clock,” says Dr. Michael Breus, Ph.D., a clinical psychologist and founder of TheSleepDoctor.com, a OneCare Media company (OneCare is the parent company of SleepFoundation.org).

So how did we get here? And how do we ensure we get a good night’s sleep, even as streaming services and our devices make it increasingly easier to watch even more TV? Here’s a look.

Is TV Time Eating Into Bedtime?

Let’s start with the effect TV time has on our sleep itself.

Yes, that’s weird, considering the point of watching TV before bed often is to relax, not to add to our stress by removing sleep. But that may be a side effect, says Craig Richard, Ph.D., professor of biopharmaceutical sciences at Shenandoah University, founder of the website ASMR University, and host of the podcast “Sleep Whispers.”

“Overall, lack of proper sleep has been shown to compromise most aspects of physical and mental health throughout the lifespan,” he says.

And TV certainly has made it easier for that to occur. The number of households with televisions jumped from about 20,000 in 1946 to 15.3 million in 1952. It wasn’t long before late-night TV was disrupting the sleep of the American public with the debut of “The Tonight Show” in 1954. Then in 1980, the first 24-hour television news network, CNN, debuted.

High-speed internet brought more entertainment options into our homes. With it came streaming services delivering content on them. These services made rolling from one episode into another much easier. Delivery platforms also changed, with phones, laptops, and tablets making TV-watching portable. 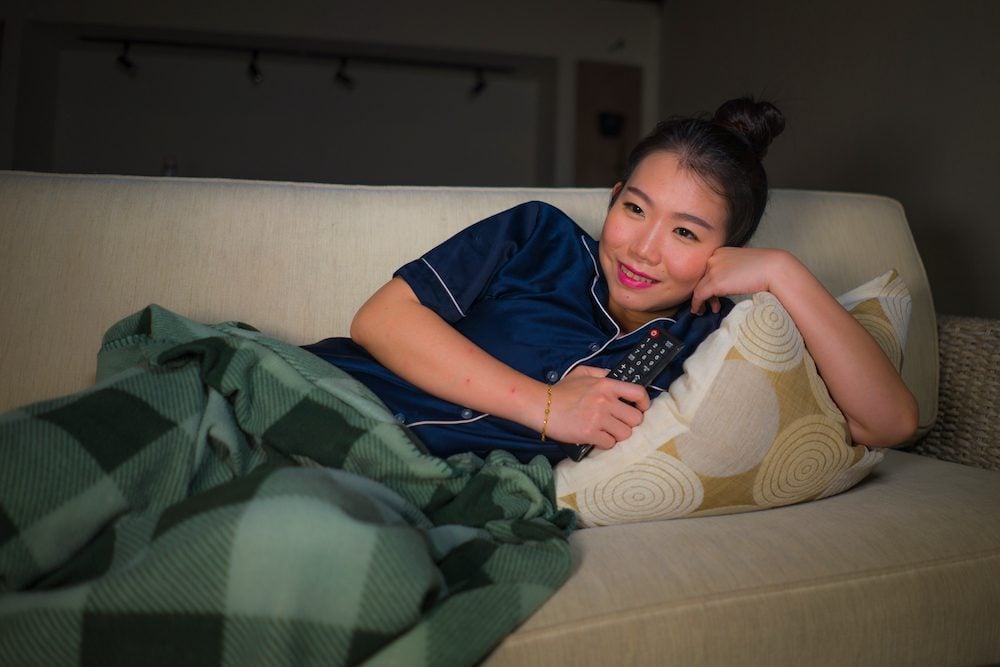 One thing that has changed: We can now watch tons of the same thing consecutively. And we like doing it.

The popularity of binge-watching increased after Netflix created its streaming service in 2013, with entire seasons of shows becoming available at once. What is binge-watching? Typically, it refers to watching multiple episodes of a single series in one sitting. The habit of watching hours of shows on Hulu, Disney+, Netflix, or Amazon’s Prime Video intensified in recent years, accelerating even more during the COVID-19 pandemic.

In other words, you’re not alone in binging all of the latest “Stranger Things.” Netflix says the latest season of that show logged 1.15 billion viewing hours in its first 28 days, becoming the first English-language show to do so. That’s roughly 3.5 hours per person in the U.S., for one show.

80.6% of survey respondents say their binge-watching habits have stayed the same or increased in the past two years.

Thank the ability to have us skip commercials, recaps, and credits, Richard says.

“Viewers need to have more discipline today — and awareness of the value of sleep — to be able to stick to that promise of, ‘just one more episode,'” he says.

In turn, we may be watching more, even if we’re not sleeping less because of it. About one quarter, or 24.7%, of respondents admitted to watching two hours of TV on a typical night, with 16.8% watching three hours and 18.6% watching four hours or more.

How Nighttime TV-Watching Affects Our Sleep

What’s wrong with all of this? It’s not that the technology or the artificial light that a TV or phone emits is inherently bad for sleep, Dr. Breus says.

“Viewers need to have more discipline today — and awareness of the value of sleep — to be able to stick to that promise of, ‘just one more episode.'” — Craig Richard, Shenandoah University

Watching hours of television at night also stimulates your mind at a time when you need to be winding down.

“Laughing through a string of back-to-back episodes of your favorite comedy before bed can leave you wide awake late into the night and exhausted the next day,” Dr. Breus says.

Yes, reading a book — as 20.4% of survey respondents do before bed — can have a similar effect. But getting tired of a book doesn’t mean you’ll likely pick up other books randomly.

“Flipping through channels, or offerings on a streaming service, however, literally happens at the touch of a button,” says Jan Van den Bulck, Ph.D., a professor in the Department of Communication and Media at the University of Michigan who specializes in the media effects on sleep. “That intensifies the experience and makes it easier to keep putting off bedtime.”

It’s not just TV shows that keep us up. Videos on YouTube, TikTok, and other platforms are the programming of choice for 38.8% of adults before bed. As for regular TV series, 36.9% say that was their preferred pre-bedtime entertainment, with 20.9% watching the local news. Close to 30% choose “whatever looks good at the moment.”

Changing the Channel on Your Bedtime Routine

How do you break out of your nighttime TV habit? Start by re-establishing a regular bedtime routine.

This doesn’t mean you have to give up all screens before bed.

Richard says the initial stage of a bedtime routine is all about being still. You can read a book, listen to a podcast, or even watch a show — as long as it’s something you find relaxing.

“Laughing through a string of back-to-back episodes of your favorite comedy before bed can leave you wide awake late into the night and exhausted the next day.” — Dr. Michael J. Breus, TheSleepDoctor.com

At some point, however, it’s time to turn off the TV and put away the phone. Opening a book and reading before bed is an excellent way to quiet the mind before sleeping. If you don’t enjoy reading, Richard recommends turning on a gently narrated audiobook or podcast.

Instead of cutting out media completely, Van den Bulck recommends thinking about media use as a series of triggers, taking note of the content and how it affects you.

The key, Van den Bulck says, is to be aware of what types of screen-based activities cause you stress or lead to binge-watching. If checking your work email or scrolling through social media leads to hours on your phone or computer, avoid those before bed. Knowing how different media affect you and impact your sleep will allow you to adjust your rest accordingly.

The survey commissioned by SleepFoundation.org was conducted on the online survey platform Pollfish between June 2 and June 3, 2022. Results are from 1,250 survey participants who were ages 18 and older and lived in the United States at the time of the survey. All attested to answering the survey questions truthfully and accurately.

Hilary Achauer is a journalist and marketing content writer specializing in health, wellness, and fitness. She has written for Slate, The Washington Post, The Week, Men's Health, and the CrossFit Journal.

Hilary Achauer is a journalist and marketing content writer specializing in health, wellness, and fitness. She has written for Slate, The Washington Post, The Week, Men's Health, and the CrossFit Journal.