Opens in a new window
Home / Sleep News / How Much Melatonin Do We Really Take?

How Much Melatonin Do We Really Take?

Melatonin’s popularity is accelerating fast. More than five times as many U.S. adults used melatonin in 2018 as in 2000. It’s readily available in the U.S. and prescription-free. You can even buy it at the supermarket.

To get a closer look at our melatonin use, SleepFoundation.org surveyed 1,250 U.S. adults in September 2022 who had taken melatonin at least once in the prior three months.

What we found: The average adult who consumes melatonin does so 211 days a year, or roughly four days a week. More than a third of adults (38.6%) take it daily. The average dosage among all survey respondents was 4.8 milligrams.

“Before relying on any substance for sleep, make sure your anxiety is well-managed, your bedtimes are regular, and that you are getting daylight and exercise during the day.” —Dr. Alex Dimitriu, Menlo Park Psychiatry & Sleep Medicine

That sounds about right, considering those bottles of 5-milligram melatonin pills at the store — not to mention melatonin being nearly a billion-dollar industry, if not more so.

But are we doing it right?

The Reasons We Take Melatonin

Let’s start with what melatonin is. It’s a hormone produced in the pineal gland in our brain, says Dr. Alex Dimitriu, founder of Menlo Park Psychiatry & Sleep Medicine in Menlo Park, California, and SleepFoundation.org medical review panel member. Darkness tells our bodies to produce it. Light tells us to stop.

Thus: “It plays a key role in our circadian rhythms, helping us sleep at night,” Dr. Dimitriu says.

Our bodies produce as much as 0.1 milligrams of melatonin a night, studies say.

Sometimes, we want more. According to a separate SleepFoundation.org survey conducted in June 2022, 27.4% of U.S. adults take supplemental melatonin as a sleep aid, making it the most popular one. Among respondents to the September 2022 SleepFoundation.org survey, 57% take melatonin to fall asleep faster. Some 88% of them say it does just that. Studies have shown melatonin use can decrease sleep latency, or the time it takes to fall asleep, by four minutes.

That mostly tracks to when we take it: Nearly half of respondents (49.1%) consume melatonin at night, 47.8% right before bed, and 38.6% when they are having trouble sleeping. This allows melatonin to do its thing, which takes as little as 20 minutes. But 48.1% of respondents also say they take melatonin also to help them sleep longer, and 78.4% agree it has that effect. Varying groups of respondents say they take it at all times of the day. Another 7.7% use it as a contraceptive, harkening to older research tying it to birth control.

Much of this could occur because melatonin is considered safe and natural. How we consume it varies, however.

How Much Melatonin Is Too Much?

The amount of actual melatonin that’s in those supplements at the store varies. Melatonin is typically sold in doses ranging from 0.3 milligrams to 20 milligrams or more, even up to 60 milligrams, according to the label. It can come in many forms, including tablets, time-release capsules, sprays, and gummies. Of surveyed adults, 63.4% take it in gummy form, and 56.6% consume it as a pill or tablet.

Studies say the appropriate dose of melatonin for adults ranges from 1 to 5 milligrams. Overall, 71.2% of survey respondents say they take 5 milligrams or less. Meanwhile, 4.2% don’t know how much they take, which climbs to 22.2% when users describe their consumption as “infrequent.”

Among people who take melatonin daily, the average dosage increases from 4.8 milligrams to 6 milligrams, according to the survey. 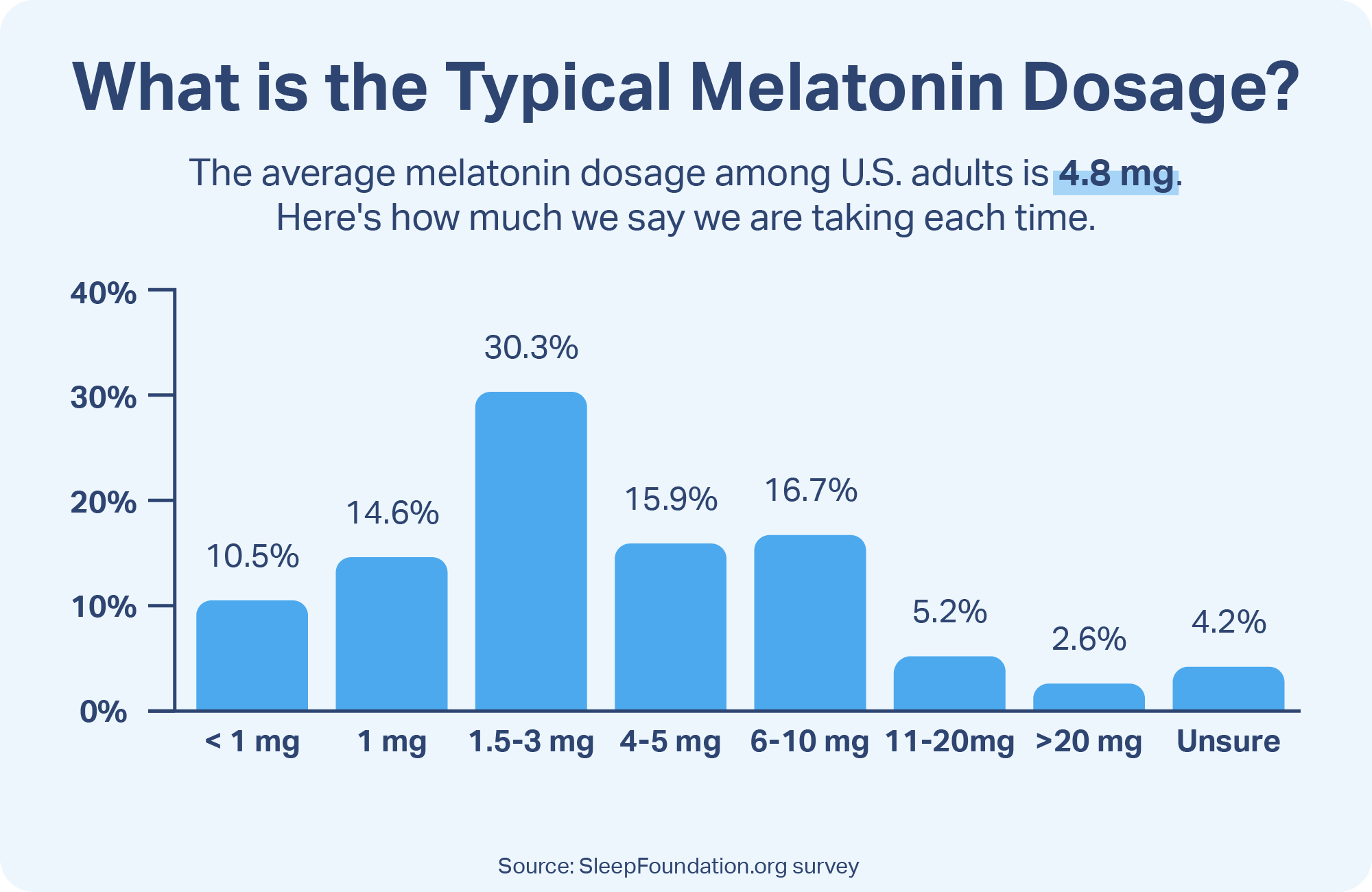 “Most people should not exceed a dose of 3 milligrams,” Dr. Dimitriu says.

What’s the risk of taking too much? You likely will not overdose. But you may see side effects.

“Any medication that makes you tired [like melatonin does] can increase your risk for falls, dizziness, and possibly lead to next-day sedation,” Dr. Dimitriu says. “I’ve also had patients report increased nightmares or vivid dreams with melatonin.”

Those side effects may be more prevalent among people who don’t consult their physician before taking more melatonin than recommended or who don’t know how much they’re taking. And that may be many of us: Although 22.2% of survey respondents started taking melatonin based on recommendations from friends and family, 19% did so on a doctor’s recommendation. Some 13.8% started it as an experiment, compared to 12.7% doing so via a prescription.

Some users don’t consult their doctor because they assume it’s safe. As president of Illuminate Labs, which aims to help solve safety issues within the supplement industry, Calloway Cook of Northampton, Massachusetts, says he hasn’t felt the need for that advice.

“Melatonin interacts with many medications, including antidepressants, diabetes medication, birth control, and blood pressure medication,” he says. “Most people have no idea and don’t tell their doctor, so this could be a huge issue.”

How Age Factors Into Melatonin Use

So why do we take melatonin at all, especially if our bodies produce it anyway?

Like many things, natural melatonin production can vary based on age, diet, and certain health conditions that may affect sleep7. Dr. Breus says only four types of people really need it: “shift workers, people with jet lag, kids on the [autism] spectrum, and older people who have a melatonin deficiency.”

Speaking of younger people, though: 68.4% of survey respondents reported children using melatonin in their households. In 26% of those households, those children were ages 9 and younger.

Parents are advised to use caution when considering melatonin for their children. U.S. poison control centers report a 530% increase in melatonin-related calls involving children between 2012 and 2021. In response, the American Academy of Sleep Medicine (AASM) recommends parents talk to a doctor before giving melatonin to a child.

Samantha Linnett, a Washington, D.C.-based travel blogger, says she has taken melatonin since high school. It helped her fall asleep within 30 minutes. Now 28, she has boosted her dosage from 5 milligrams then to 10 milligrams now.

As for the “Why?” question: People may take melatonin for different reasons. Mostly, it makes us feel good. More than half (54.5%) of survey respondents report feeling refreshed after taking melatonin to sleep, while 24.6% still feel groggy the next morning. 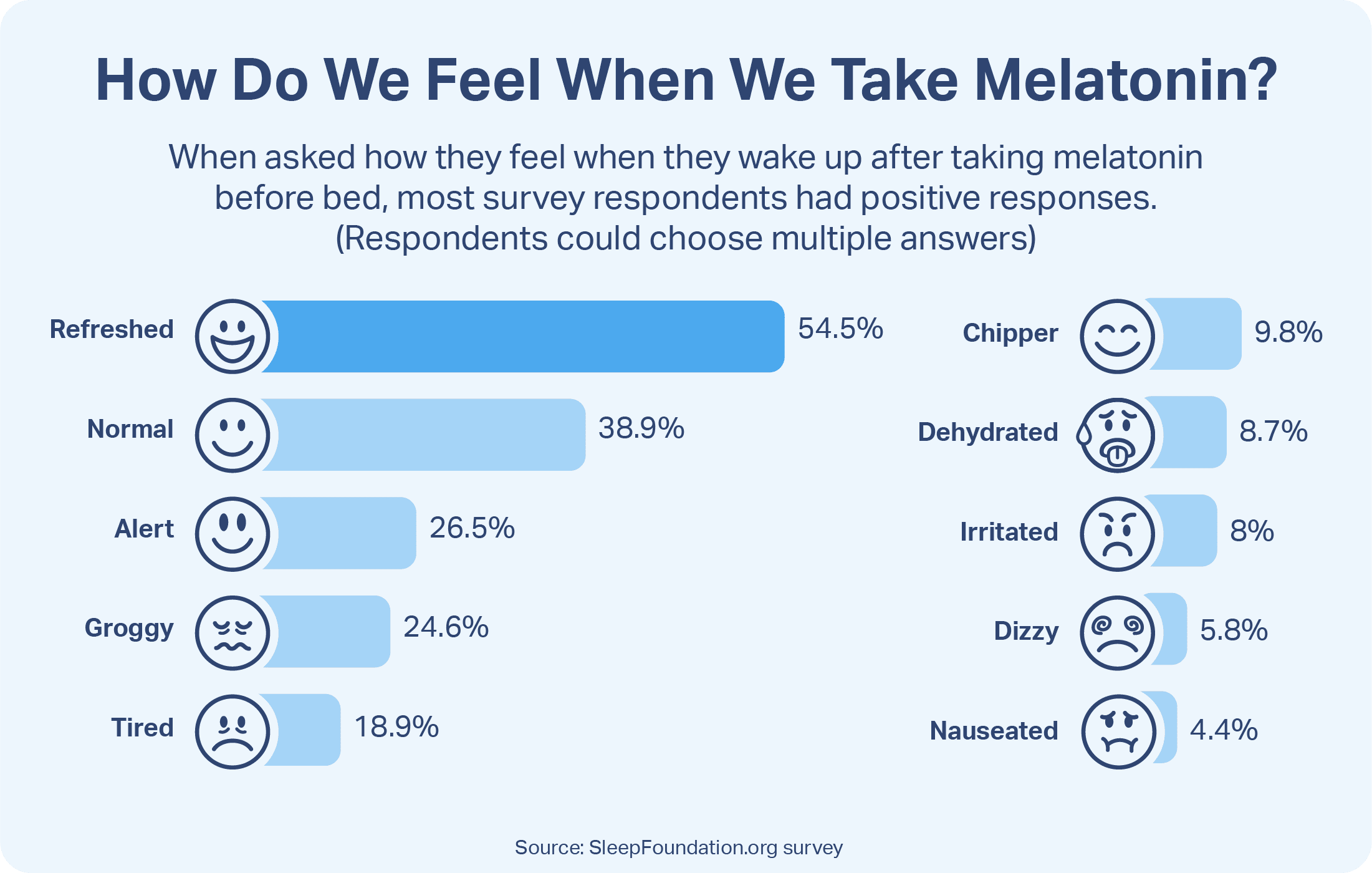 Dr. Dimitriu says melatonin shouldn’t be your first option to get sleep, however.

“Before relying on any substance for sleep, make sure your anxiety is well-managed, your bedtimes are regular, and that you are getting daylight and exercise during the day,” he says.

The survey commissioned by SleepFoundation.org was conducted on the online survey platform Pollfish on Sept. 20, 2022. Results are from 1,250 survey participants who were ages 18 and older and lived in the United States at the time of the survey, in addition to having consumed melatonin in the prior three months. All attested to answering the survey questions truthfully and accurately.