Medical Disclaimer: The content on this page should not be taken as medical advice or used as a recommendation for any specific treatment. Always consult your doctor before taking any new medication or changing your current dosage.

Obstructive sleep apnea (OSA) is a common disorder that affects a person’s ability to breathe while they sleep. OSA affects around one billion adults worldwide and between 2% and 9% of adults in the United States, though experts believe that actual prevalence may be much higher because the majority of cases go undiagnosed.

Without treatment, interruptions in breathing caused by OSA are associated with significant health consequences. For this reason, it’s important to know the signs of sleep apnea and when to visit a doctor. Learn more about the causes and diagnosis of OSA, as well as treatment options that can restore healthy nighttime breathing.

Obstructive sleep apnea is a sleep disorder characterized by repeated obstruction to the airway during sleep. After a person with OSA falls asleep, their airway intermittently narrows or collapses, causing fragmented sleep and contributing to severe health consequences if left untreated. 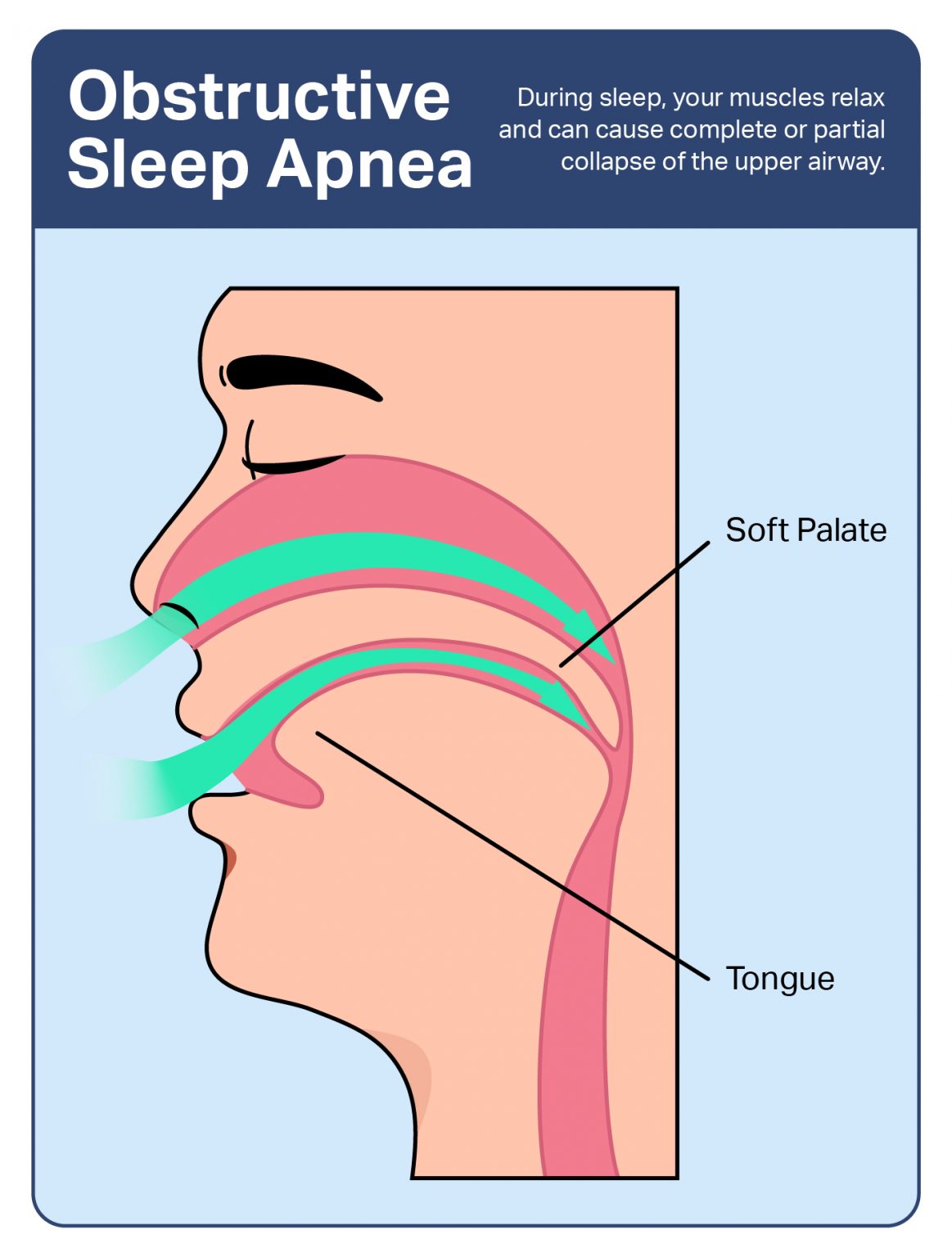 The majority of people with obstructive sleep apnea feel excessively tired during the day and snore loudly at night. However, some people with OSA never develop noticeable symptoms, or they might attribute these signs to another cause. Symptoms of OSA may be present both at nighttime and during the day.

Nighttime symptoms of sleep apnea include:

Daytime symptoms of sleep apnea include:

Signs You May Have Obstructive Sleep Apnea

Symptoms of OSA that occur during sleep can be difficult for a person to detect on their own, and it can take years for an individual to recognize their symptoms and see a doctor. Some of the first noticeable signs of obstructive sleep apnea may include excessive tiredness during the day, reports from loved ones, or early morning symptoms.

Obstructive sleep apnea typically occurs due to a natural relaxation of the muscles that surround the throat while a person sleeps. During the daytime, these muscles hold the airway open and facilitate breathing. As these muscles relax during sleep, the airway can narrow or close and reduce the space needed for airflow.

For most people, this narrowing of the airway during sleep does not cause any problems. In people who are susceptible to OSA—for example, those with a naturally narrow throat—more severe narrowing causes obstructions and failed attempts to inhale. Trying to inhale against a closed or narrow airway creates abnormal levels of both oxygen and carbon dioxide in the blood, in addition to fragmented sleep.

A doctor may diagnose OSA when apneas or hypopneas occur more than five times an hour and are witnessed by a loved one or cause negative health effects.

Certain physical features can also make a person more likely to develop OSA, such as:

There are other risk factors that are still being studied, but may increase a person’s risk of OSA.

How is Obstructive Sleep Apnea Diagnosed?

To diagnose obstructive sleep apnea, doctors collect a patient’s medical history and symptoms, conduct a physical exam, and refer them for a diagnostic sleep study.

While collecting a person’s medical history, a doctor may inquire about risk factors as well as both nighttime and daytime symptoms. In some cases, a doctor may have a person fill out a questionnaire to look for additional symptoms and help differentiate between OSA and other conditions.

Because sleepers may not recognize their nighttime symptoms, roommates, bed partners, and loved ones may also be asked to report a person’s symptoms.

Doctors typically perform a physical exam to check for obesity, physical features that increase the risk of OSA, a person’s neck and waist size, and signs of health complications associated with OSA.

A sleep study can confirm a diagnosis of obstructive sleep apnea and measure the severity of breathing disruptions. Also called polysomnography, a sleep study involves an overnight stay at a specialized sleep laboratory, often located within a sleep center or hospital. Sometimes a sleep study can be completed at home with a portable sleep monitor.

During a sleep study, a trained technician will place sensors on the head and other parts of the body. They may also place several belts around the chest and position a small tube beneath the nose. These devices take measurements of various body functions during sleep, such as breathing, movements, heart rate, and how long it takes to enter different stages of sleep.

A doctor may recommend either a full-night or split-night sleep study.

When considered in combination with a person’s symptoms, the number of breathing events per hour found during a sleep study can help doctors determine the severity of OSA.

While polysomnography conducted in a sleep laboratory is the preferred diagnostic test for obstructive sleep apnea, some people may be eligible for a home sleep apnea test. Home sleep apnea testing may be appropriate for people with a high likelihood of moderate to severe OSA. It may also be required by a person’s health insurance as a preliminary test for OSA.

Individuals undergoing home sleep apnea testing should remain in close contact with their doctor or sleep specialist. A trained medical provider can help ensure that sensors are placed appropriately and will need to interpret the test results.

Behavior changes are also an important tool in treating OSA and can help most people better manage their condition.

Other Treatments for Obstructive Sleep Apnea

In people who are unwilling to try, unable to use, or who would not benefit from PAP therapy, doctors may recommend an oral appliance, surgery, or treatment with medications.

Untreated obstructive sleep apnea is associated with numerous negative health consequences. Many complications of OSA are caused by a sleeper’s unsuccessful attempts to inhale when their airway is closed or obstructed. These failed inhalations reduce oxygen levels in the blood, increase carbon dioxide, and lead to repeated nighttime awakenings.

It’s important for people diagnosed with obstructive sleep apnea to be informed about their diagnosis and the importance of appropriate treatment. While OSA typically cannot be cured, treatment helps most people reduce breathing disruptions, improve sleep quality, and minimize health consequences. The following tips can help people learn to live with OSA.

People living with sleep apnea should also ensure that they get enough sleep each night. In addition to following their prescribed treatment plan, people can improve their sleep by following basic sleep hygiene practices.

Rob writes about the intersection of sleep and mental health and previously worked at the National Cancer Institute.

Rob writes about the intersection of sleep and mental health and previously worked at the National Cancer Institute.