Obstructive sleep apnea (OSA) is one of the most common sleep-related breathing disorders. People with OSA frequently wake up choking or gasping for air1. While these episodes usually last no longer than 30 seconds, the disorder can negatively impact sleep quality and lead to excessive daytime sleepiness.

Some physicians and researchers have explored the effectiveness of using the Mallampati score to evaluate patients for risk of OSA. Based on a 1 to 4 scale, the Mallampati score assesses the size and shape of a patient’s tongue and esophageal airway to predict how difficult it might be to intubate that person. Some studies suggest the Mallampati score is an accurate indicator of OSA – particularly for children – and may help identify patients who should be prioritized for a sleep study and/or sleep medicine referral. Other studies have yielded inconclusive results.

Sleep apnea, also known as sleep-disordered breathing, occurs when breathing stops or becomes shallow during sleep, followed by gasping or choking episodes that often lead to waking. OSA is characterized by a physical obstruction that blocks the breathing passages and impedes airflow. Possible anatomic sources of this obstruction include an enlarged tongue or tonsils, retracted lower jaw, or relatively thick neck circumference. This condition differs from central sleep apnea (CSA), which occurs due to interrupted signals between the brain and muscles that facilitate breathing.

OSA affects 2% to 9% of adults, and most cases are not diagnosed. Many patients are evaluated for OSA severity using a scale known as the apnea-hypopnea index (AHI), although this method has limitations. “Apnea” refers to any episode during which breathing fully ceases, while a “hypopnea” is an episode involving partial airway collapse but not complete loss of breath. The AHI categorizes OSA in three general categories of severity based on the number of apnea and/or hypopnea episodes per hour of sleep:

Physicians will explore other factors when evaluating OSA severity. Body-mass index (BMI) is often measured because obesity is considered a major predictor for OSA. Those with a BMI of 30 or greater are considered obese. Doctors also take other symptoms like snoring and excessive daytime sleepiness into account. Although polysomnography (sleep study) is the gold standard for the diagnosis, severity classification, and therapeutic monitoring of OSA, cost and accessibility are some of its limitations. Therefore, the AHI has long been considered the primary measurement for the severity level of OSA.

What is the Mallampati Score? 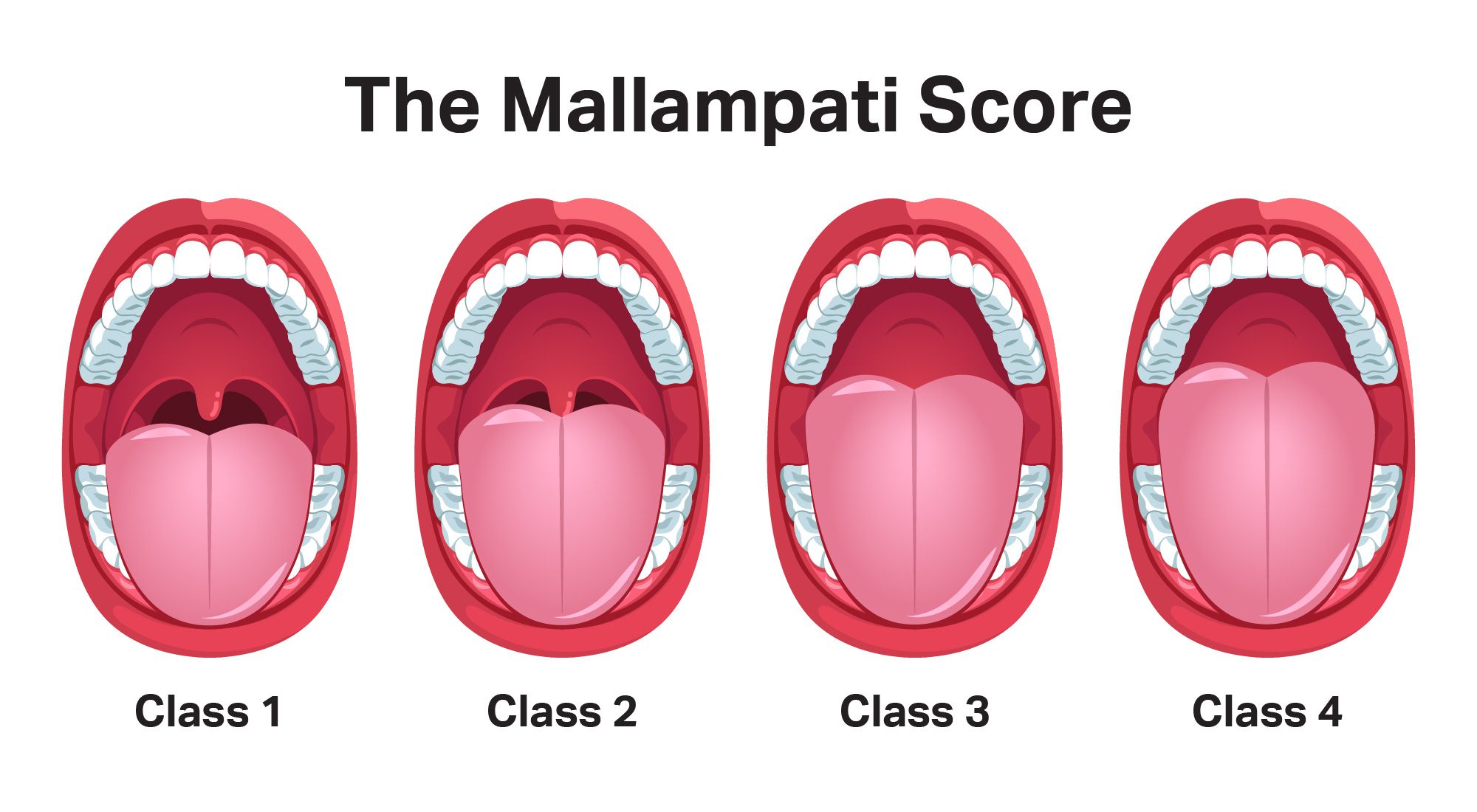 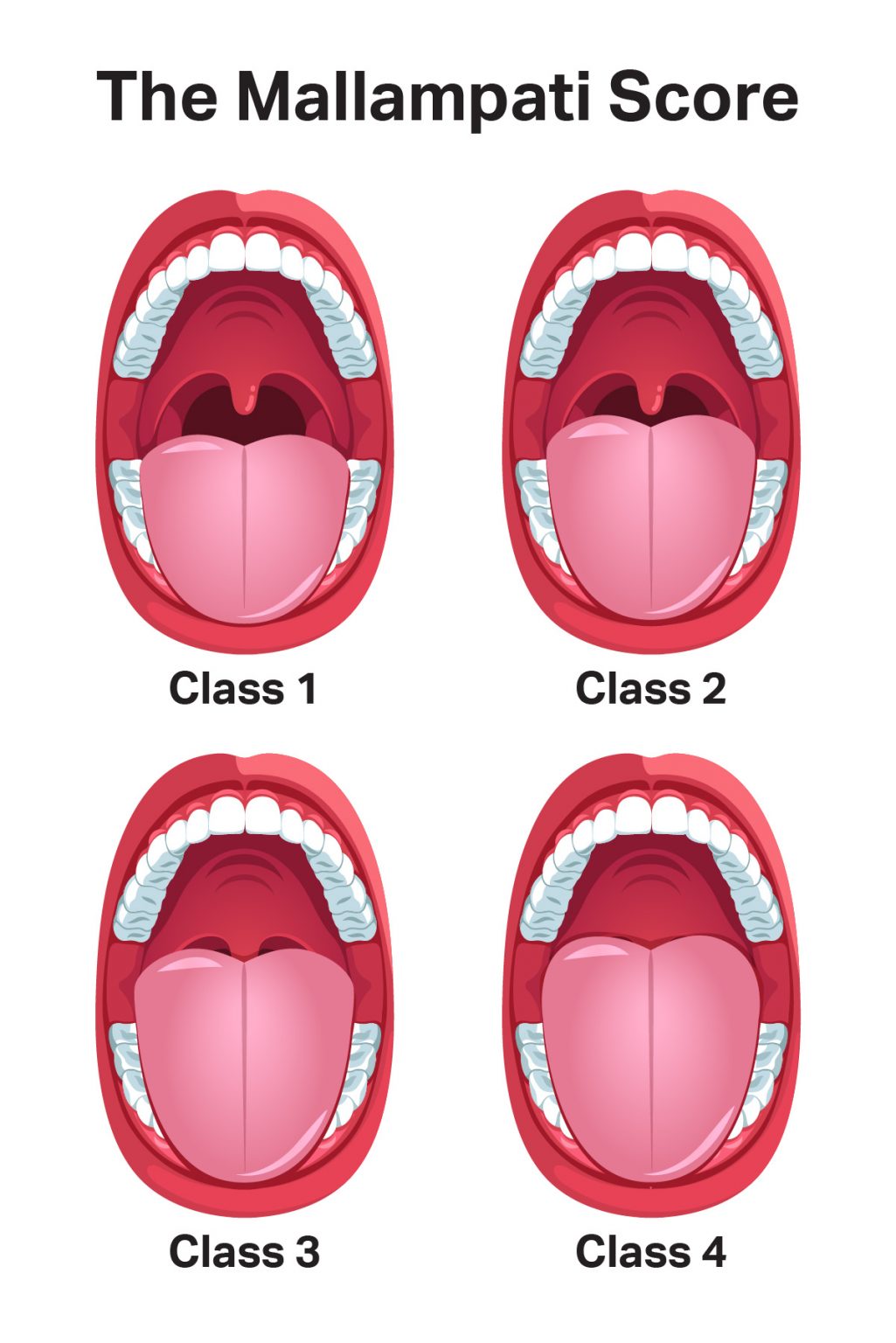 Introduced in 1985, the Mallampati score identifies patients at risk for difficult intubation based on the structure of their oropharynx. The latest version of this score is based on a 1 to 4 scale with the following criteria:

This assessment is performed while the patient sits with their head in a neutral position and their mouth open. Since there appears to be a correlation between sleep-disordered breathing and a higher risk of intubation, patients who receive a Mallampati score of 3 or 4 are often considered to be at increased risk of OSA.

However, researchers have reported conflicting results about the efficacy of using Mallampati scoring to predict OSA. One study suggested a strong link between Mallampati score, AHI, and tonsil size for pediatric patients. This study noted conclusive results for children who had and did not have OSA, as defined by higher ASI scores.

Other research argues Mallampati scoring is an unreliable way to measure OSA. Another study confirmed the correlation between the Mallampati scale and AHI, but also noted minimal variability in AHI between Mallampati classes. In this study of adult patients, the combination of  BMI, gender, and age were more effective predictors for AHI than Mallampati scoring.

A third study suggested that the Mallampati score has practical applications before polysomnography sleep tests but limitations as a diagnostic evaluation. For every increase of 1 point on the Mallampati scale, a patient’s risk of having OSA more than doubled. Because a Mallampati assessment is non-invasive, the score could potentially be of use during physical examinations – but the study’s authors also concede this test is less useful for evaluating patients with mild OSA symptoms.

It’s important to note that the AHI assessment also has detractors. Some studies criticize AHI for solely focusing on the number of apneas and hypopneas per hour of sleep without taking the duration of each episode into account, as longer episodes pose a greater risk to the patient’s overall health. Additionally, AHI may not be completely reliable because patients with the same AHI score don’t necessarily share the same severity of OSA symptoms due to other factors such as age and daytime symptoms.

Ultimately, most doctors won’t rely solely on AHI or Mallampati scores when evaluating patients for OSA. Diagnosing OSA and other forms of sleep apnea is a fairly intensive process that involves obtaining a thorough medical history, and conducting different tests and screenings. The physician will likely conduct a physical examination that includes measuring the patient’s neck circumference, checking for enlarged tonsils, and other steps to determine the nature of the obstruction. They may also prescribe blood tests, pelvic ultrasounds, and other evaluations to rule out other medical conditions.

Another key component of the OSA diagnosis is the sleep study. The doctor may refer the patient to a sleep specialist or clinic, where the study can be conducted onsite, but patients may also complete the study at home. AHI is measured during the study along with activity in muscles that facilitate breathing, blood oxygen levels, and brain and heart activity.

For treating OSA, doctors often recommend lifestyle changes such as dietary adjustments, smoking cessation, and weight loss. Continuous positive air pressure (CPAP) therapy, which involves a machine that delivers pressurized air at prescribed intervals to assist sleepers with breathing, has also proven effective for many people with OSA. If CPAP does not yield results, variations on this therapy such as bi-level positive air pressure (BiPAP) may be prescribed instead. Other treatments and therapies may also be possible, depending on the severity and type of apnea, and should be discussed with your doctor.