We may earn a commission through products purchased using links on this page. Products or services advertised on this page may be offered by an entity that is affiliated with us. Learn more about our process here. Use this SleepFoundation.org link for the most current discount on Ectosense products

Medical Disclaimer: The content on this page should not be taken as medical advice or used as a recommendation for any specific treatment or medication. Always consult your doctor before taking a new medication or changing your current treatment.

The Ectosense NightOwl is an app-based home testing device for obstructive sleep apnea (OSA). Using your fingertip as a contact point, the NightOwl measures your breathing patterns to determine whether you meet diagnostic criteria for OSA.

The NightOwl Companion app allows you to pair the device with your phone and send data directly to your physician. Standard NightOwl devices are rechargeable and can record approximately 25 hours of data per charge. Ectosense also sells the NightOwl Mini, which costs less but can only be used 10 times.

As with other home-based sleep apnea tests, the NightOwl is more affordable and more convenient than undergoing an overnight sleep study. The device is also small and lightweight, so it shouldn’t lead to sleep disruptions.

We’ll cover how to acquire, set up, and use the NightOwl, how the device works, and additional steps you’ll need to take after completing your at-home test.

OSA is a sleep disorder that causes people to temporarily lose their breath during sleep and wake up choking or gasping for air. The disorder occurs due to a physical obstruction restricting airflow through the breathing passages.

Obstructions that can cause sleep apnea include swollen tonsils or adenoids or having a large tongue or a relatively short lower jaw. Obesity is also considered a major risk factor for OSA. People with OSA often snore heavily.

The disorder can lead to nightly sleep disruptions, which can lead to feelings of grogginess and fatigue the next day and in turn can have a negative effect on quality of life and overall health. OSA is also associated with long-term health problems such as heart failure and stroke, as well as mental health conditions like depression and anxiety.

If you experience OSA symptoms, receiving a diagnosis is essential for getting the treatment you need. Using a home testing device like the Ectosense NightOwl can be a crucial first step for people with this condition.

How Does the Ectosense NightOwl Work?

The NightOwl detects sleep apnea symptoms with a sensor that attaches to your fingertip. The device uses both an accelerometer and photoplethysmography (PPG) to record the following metrics:

Finger sensors are often used in overnight sleep tests conducted in labs, also known as polysomnography. Sensors measuring other contact points such as your wrist and chest may also be used during sleep studies.

Since the NightOwl only attaches to your finger, the device is less invasive than instruments used in polysomnography. By the same token, the NightOwl’s data-collecting capabilities are more limited.

How Do You Buy and Set Up the Ectosense NightOwl?

The NightOwl requires a prescription from a licensed physician. You can obtain the device through your doctor. Alternatively, the NightOwl is widely available for purchase online.

If you decide to buy the NightOwl online, you’ll need to be approved for the device. The online seller you choose will connect you with a doctor for a virtual consultation, during which they determine whether you qualify for a home sleep study. The doctor bases their decision on factors like your age, weight, habits, and sleep history. If you’re approved for the NightOwl, the doctor writes you a prescription for the device.

To use the NightOwl, you’ll need to download the NightOwl Companion app. This free app is available through the Apple Store and Google Play and is compatible with most iOS and Android devices. The device comes with an activation code that is required to use the app.

How Do You Use the Device and the NightOwl Companion App?

Once the NightOwl arrives and the app is fully downloaded, you’ll need to follow these steps:

Your doctor will review the data and go over the results during a follow-up consultation. This may lead to a diagnosis. Alternatively, they may recommend further testing.

Who Should Use the Ectosense NightOwl?

The NightOwl is approved by the Food and Drug Administration (FDA) for use by people 13 and older with a doctor’s prescription. People who show symptoms of moderate to severe OSA may be good candidates for an at-home test.

Common symptoms of OSA include:

People who have not consulted with their doctor about using the NightOwl should refrain from using the device until they do so.

Pros and Cons of the Ectosense NightOwl

The NightOwl has some advantages over traditional sleep studies and other at-home sleep apnea tests.

There are also some drawbacks to using the NightOwl, including:

The Ectosense NightOwl is one of the lightest and least obtrusive home testing devices for OSA on the market. It’s also one of the most affordable, and the multi-use design is helpful if you don’t record conclusive data on the first night of testing.

However, like other at-home testing devices, it may not be a suitable option for people who display symptoms of mild OSA, due to the potential of overestimating AHI score. It also lacks the more comprehensive testing capabilities of devices that include wrist and chest sensors and microphones to record snoring.

Before purchasing the NightOwl, talk to your doctor about your symptoms and ask if they think the device is right for you.

Our product experts have extensive experience testing just about every sleep product on the market. Send an email to [email protected] or call us at (877) 672-8966 with your questions and we’ll help you find exactly what you’re looking for. 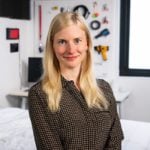 Lauren is a Certified Sleep Science Coach with extensive experience researching and testing a wide variety of sleep products. Understanding the Science of Sleep Stages of Sleep Can You Catch Up on Sleep? Does Napping Hurt Sleep At Night? How Many Calories Do You Burn Sleeping?

How to Sleep Better Learn About Sleep Hygiene How to Improve Sleep Quality How to Relieve Stress At Bedtime How Much Sleep Do You Need?