While we usually think of being asleep or awake as clearly defined and distinct, conditions like sleep paralysis challenge these fixed boundaries.

Sleep paralysis is a temporary inability to move that occurs right after falling asleep or waking up. Individuals remain aware during episodes, which frequently involve troubling hallucinations and a sensation of suffocation.

These episodes of sleep paralysis involve elements of both sleep and wakefulness, which is part of why they can give rise to distressing symptoms.

While much is still unknown about sleep paralysis, a review of its types, symptoms, causes, impacts, and treatment can enable a better understanding of the condition and how to try to prevent it.

What Is Sleep Paralysis?

Sleep paralysis is a condition identified by a brief loss of muscle control, known as atonia, that happens just after falling asleep or waking up. In addition to atonia, people often have hallucinations during episodes of sleep paralysis.

Standard REM sleep involves vivid dreaming as well as atonia, which helps prevent acting out dreams. However, under normal circumstances, atonia ends upon waking up, so a person never becomes conscious of this inability to move.

As a result, researchers believe that sleep paralysis involves a mixed state of consciousness that blends both wakefulness and REM sleep. In effect, the atonia and mental imagery of REM sleep seems to persist even into a state of being aware and awake.

What Are the Types of Sleep Paralysis?

In the medical literature, two terms are commonly used to categorize cases of sleep paralysis.

In many cases, these two defining characteristics are combined to describe a condition of recurrent isolated sleep paralysis (RISP), which involves ongoing instances of sleep paralysis in someone who does not have narcolepsy.

The fundamental symptom of sleep paralysis is atonia or the inability to move the body. It occurs shortly after falling asleep or waking up, and during an episode, a person feels awake and is aware of this loss of muscle control. 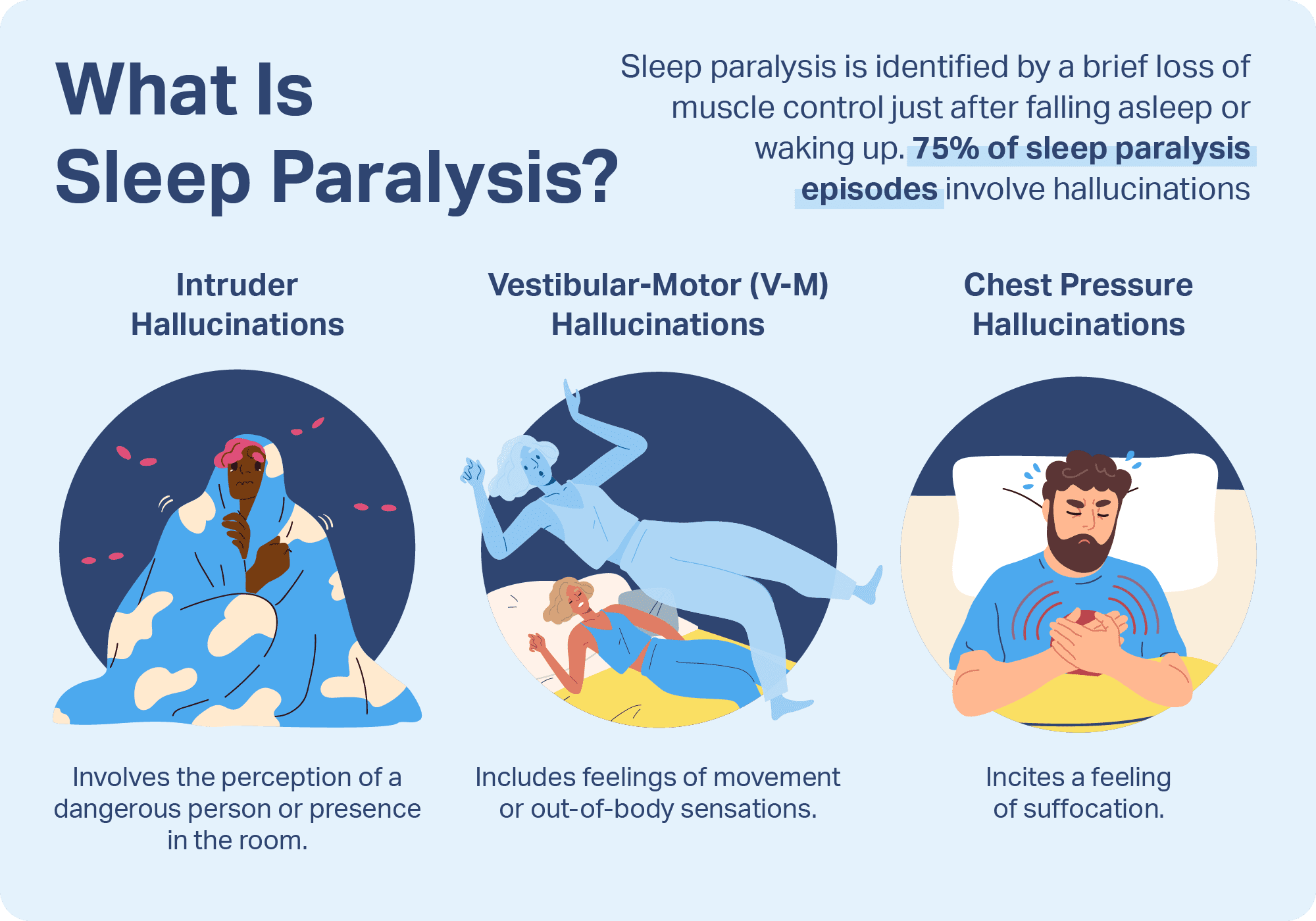 Atonia is often distressing, and troubling hallucinations can make sleep paralysis episodes even more bothersome. For this reason, around 90% of episodes are associated with fear while only the minority have more pleasant or even blissful hallucinations. The perception of these episodes has been found to vary significantly based on a person’s cultural context.

Episodes can last from a few seconds to around 20 minutes, and the average length is between six and seven minutes. In most cases, episodes end on their own but occasionally are interrupted by another person’s touch or voice or by an intense effort to move that overcomes atonia.

How Common Is Sleep Paralysis?

Estimates vary, but researchers believe that about 8% of people experience sleep paralysis at some point in their life. Among these people, there is little data about how often episodes recur.

Sleep paralysis can occur at any age, but first symptoms often show up in childhood, adolescence, or young adulthood (ages 7 to 25). After starting in the teenage years, episodes may occur more frequently in the 20s and 30s.

BETTER SLEEP, FOR A BETTER YOU.

Help Us Connect You To A Better Nights Sleep

Sleep is the foundation on which mental and physical wellness is built. Let us help improve your quality of life through better sleep.

On a scale of 1-10, how disruptive is your sleep quality to your daily life?

Select which best describes your sleep challenges or goals:

What elements of your sleep environment would you like to improve?

What best describes your sleep pain?

Insomnia symptoms like having a hard time falling asleep and excessive daytime sleepiness have been found to be associated with sleep paralysis. People whose circadian rhythms are not aligned with their local day-night cycle, such as people with jet lag and shift workers, may also be at higher risk of sleep paralysis.

Certain mental health conditions have shown a connection with sleep paralysis. People with anxiety disorders, including panic disorder, appear to be more likely to experience the condition. Some of the strongest associations are in people with post-traumatic stress disorder (PTSD) and others who have had exposure to childhood sexual abuse or other types of physical and emotional distress. Stopping alcohol or antidepressants can also lead to REM rebound, which may cause sleep paralysis too.

Studies have found a higher risk in people with a family history of sleep paralysis, but no specific genetic basis has been identified.

Some studies have found that people who show traits of imaginativeness and disassociating from their immediate environment, such as with daydreaming, are more likely to experience sleep paralysis. There may be a link as well between sleep paralysis and vivid nightmares and/or lucid dreaming.

Is Sleep Paralysis a Serious Problem?

For most people, sleep paralysis is not a serious problem. It is classified as a benign condition and usually does not happen frequently enough to cause significant health problems.

However, an estimated 10% of people have more recurrent or bothersome episodes that make sleep paralysis especially distressing. As a result, they may develop negative thoughts about going to bed, reducing time allotted for sleep or provoking anxiety around bedtime that makes it harder to fall asleep. Sleep deprivation can lead to excessive sleepiness and numerous other consequences for a person’s overall health.

A first step in treating sleep paralysis is to talk with a doctor in order to identify and address underlying problems that may be contributing to the frequency or severity of episodes. For example, this could involve treatment for narcolepsy or steps to better manage sleep apnea.

Overall, there is limited scientific evidence about the optimal treatment for sleep paralysis. Many people don’t know that the condition is relatively common and thus see themselves as crazy or shameful after episodes. As a result, even just the acknowledgement and normalization of their symptoms by a doctor can be beneficial.

Because of the connection between sleep paralysis and general sleeping problems, improving sleep hygiene is a common focus in preventing sleep paralysis. Sleep hygiene refers to a person’s bedroom setting and daily habits that influence sleep quality.

Examples of healthy sleep tips that can contribute to better sleep hygiene and more consistent nightly rest include:

Improving sleep hygiene is frequently incorporated into cognitive behavioral therapy for insomnia (CBT-I), a type of talk therapy that works to reframe negative thoughts and emotions that detract from sleep.

A specific form of CBT has been developed for sleep paralysis, but more research is needed to validate its effectiveness. CBT has an established track record in addressing mental health conditions like anxiety and PTSD that may be factors influencing the risk of sleep paralysis.

Some medications are known to suppress REM sleep, and these may help to stop sleep paralysis. These medications can have side effects, though, and may cause a rebound in REM sleep when someone stops taking them. For these reasons, it’s important to talk with a doctor before taking any medication in order to discuss its potential benefits and downsides.

Dr. Dimitriu is the founder of Menlo Park Psychiatry and Sleep Medicine. He is board-certified in psychiatry as well as sleep medicine.

Dr. Dimitriu is the founder of Menlo Park Psychiatry and Sleep Medicine. He is board-certified in psychiatry as well as sleep medicine.