Opens in a new window
Home / How Sleep Works: Understanding the Science of Sleep / Alpha Waves and Sleep

Throughout the waking hours and during sleep, brain cells constantly communicate with each other through electrical pulses, which create brain waves. Tests that detect the electrical activity of the brain measure the number of brain waves per second, also called brain wave frequency.

Generally, being more awake or alert results in a higher frequency of brain waves. Being drowsy or more deeply asleep often corresponds with brain waves occurring at a lower frequency.

What Are Alpha Brain Waves?

Alpha brain waves are the main brain wave pattern that develops when a person becomes drowsy and transitions from wakefulness to sleep. They continue during the early phase of sleep until they are replaced by slower theta waves.

Alpha waves are also present when a person is awake and relaxing, such as with the eyes closed or during meditation. Alpha wave production is associated with states of creativity, but they tend to disappear when a person performs mental activity requiring greater attention.

Generally, brain waves are faster and have higher frequencies during wakefulness. Brain waves become slower when a person is drowsy and slow down further during deeper stages of sleep. However, in REM sleep, brain wave patterns resemble those of someone who is awake. 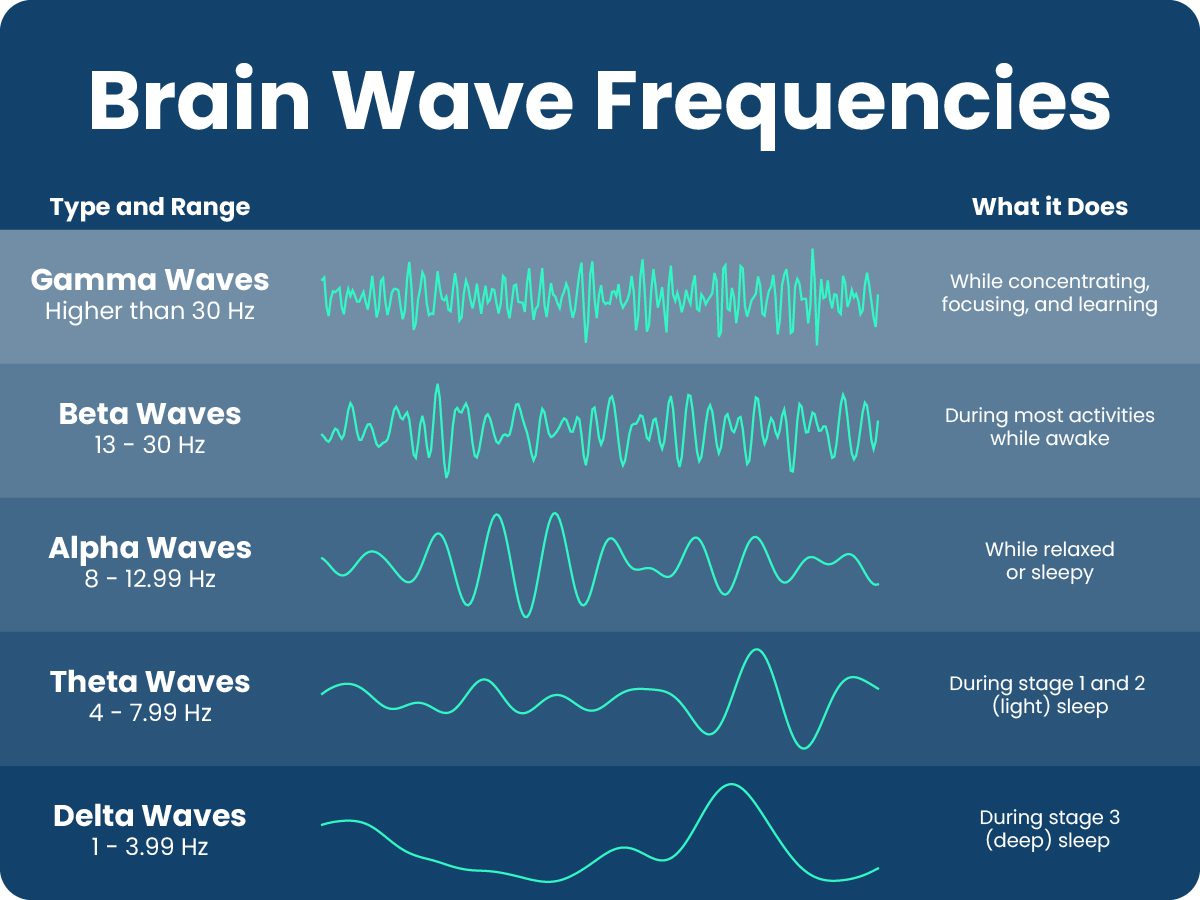 How Is Alpha Activity Measured?

Electrical activity in the brain, including alpha brain waves, is measured with an electroencephalogram (EEG). An EEG is a common component of a sleep study. Studying brain waves with an EEG helps health care professionals diagnose sleep disorders such as narcolepsy. Doctors also use EEGs to diagnose brain conditions such as epilepsy.

To conduct an EEG, a health professional adheres small electrodes to different parts of the head. The electrodes send electrical impulses from the scalp through attached wires to a machine. The machine then displays the electrical signals as waves, either on a screen or on paper.

How Do Alpha Waves Affect Sleep?

Alpha wave activity is a normal part of falling asleep. But alpha waves may also play a role in certain sleep disorders and disturbances, notably insomnia and alpha-delta sleep.

Some research suggests that patterns of alpha brain wave activity are different in people who have insomnia compared to people who do not. One study found that people with insomnia experience increased alpha wave activity and greater variation in alpha frequency before falling asleep. Researchers speculate that this may be related to an active imagination or to life factors such as stress.

Alpha-delta sleep is an abnormal brain wave pattern associated with certain health conditions. In alpha-delta sleep, the brain produces alpha waves during deep sleep, when it would normally be producing slow delta waves. The intrusion of alpha waves can make sleep unrefreshing and leave people feeling sleepy during the day.

Learn more about How Sleep Works

How Sleep Works: Understanding the Science of Sleep

Dr. Vyas is a pediatrician and founder of Sleepless in NOLA. She specializes in helping parents establish healthy sleep habits for children.